At Kyoto University’s Graduate School of Medicine, I analyzed and examined the relationship between viral causes of lymphoma and an individual’s genetic background under the direction of Dr. Tsuruyama, who is now this professor. Later, I worked as a pathologist at Otsu Hospital and Noe Hospital, where I honed my skills at diagnostic pathology and when I encountered various illnesses. During that time, I became interested in the relationship between the morphological characteristics of different illnesses, protein expression and other diagnostic criteria and the mechanism of that expression, and prognosis. Starting in 2012, I worked in the Pathology and Biology of Diseases in the Graduate School of Medicine at Kyoto University. I used a transgenic mouse expressing a fluorescence resonance energy transfer (FRET) biosensor to quantitatively and qualitatively analyze protein activity in various biological phenomena and to analyze spatiotemporal regulation of that activity. I also learned how to process a variety of digital images. Using that knowledge, I want to try and create a new form of pathology here in the Department of Drug Discovery and Medicine.

A new form of pathology

AAs I mentioned earlier, I learned pathology as a pathologist. Pathology was founded in the late 19th century by the famed Thomas Hodgkin (whom Hodgkin’s disease is named after), Carl von Rokitansky, and Rudolf Virchow. Examining diseased cells under a microscope is an essential part of pathology today, but at the time it was an innovative approach to medical research. The founders of pathology laid the cornerstone of modern medical research.

So what does pathology look like today? Today, pathology is both part of basic medicine and it plays a role in clinical medicine in the area of diagnostics. Diagnostic pathology has revealed even though two cancers may be of the same type, their prognosis may differ depending on the cells that comprise those cancers. In addition, a technique known as immunostaining has been used to examine which cells correspond to a certain type of cancer depending on the proteins they express or a specific pattern of expression. Analysis of protein expression via immunostaining has led to molecularly targeted therapies and markers with which to predict the efficacy of those therapies. From the opposite perspective, pathologists already know which immunostaining results and morphological characteristics are indicative of an illness. Pathologists use protein markers in immunostaining and routine diagnosis. If pathologists could use those markers to ascertain the mechanisms responsible for certain patterns of morphology and the mechanisms responsible for certain illnesses, then pathologists may be able to identify biomarkers that can serve as therapeutic targets or aid in diagnosis.

Given this reality, professor Tsuruyama and I are seeking to use mass spectrometry and a combination of optical microscopy/mass spectrometry to identify new biomarkers of various illnesses and new therapeutic targets. I also want to encourage greater use of digital technology in pathology. Pathology was merely qualitative, but I want to help develop techniques for quantification and automated analysis in pathology. 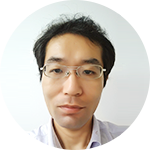