He revealed several forms of the plasticity in the cerebellar Purkinje cells at developmental climbing-fiber synapses, firing increase plasticity and associated changes, and excitability plasticity of the dendrites (Ohtsuki & Hirano, 2008 EJN: Ohtsuki et al., 2012b Neuron; Ohtsuki & Hansel, 2018 iScience). Further, he found the compartmentalization and clustering modulation of synaptic input on dendrites (*Ohtsuki, 2020, J Neurosci). In the visual cortex, using the multi-photon imaging system, he revealed the similarity in the visual function among clonally-related neurons (Ohtsuki et al., 2012a Neuron). He has also found the mechanisms of the acute inflammation-triggered plasticity in the cerebellum, and modulation of the behavior and brain activity, which was recovered by the suppression of aberrant immunity via microglia (Yamamoto et al. / *Ohtsuki, 2019 Cell Rep). Current his research is focused on cerebellar involvement of higher-order cognitions and the relevance to psychiatric diseases from the view of Neuroscience, Neuropharmacology, Drug discovery research.

Press Conference Abstract in the Society for Neuroscience 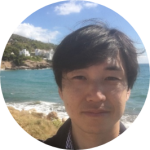